A special event took place on the 6th of September 2009 when a young man of Asian origins surprised his girlfriend at the airport with an impressive proposal.

He was helped by his friends to make a special setting using graphic designs that depicted memories of the couple’s life. Then, the future groom offered her a huge flowers bouquet and asked the big question, receiving the expected response.

In 2011, another special event took place on Toronto Airport, when David proposed his girlfriend, Alison, with whom he had a relationship of 4 years. Because they lived separately, in different towns, they made their best of their time together.

One of the most beautiful moments of the couple’s life took place on the 4th of September when Alison came in Ontario with the intention of only visiting David and his family, but instead, had the surprise of her life.

David welcomed Alison with a short interpretation of a song by Katy Perry and then asked her to marry him, in front of their family and friends, who had been called to take part in the event. The whole event was filmed by David, who wanted to be sure this way that the best moment of their lives will remain immortalized for eternity.

In March 2013, took place another proposal both unusual and beautiful, taking into account that it was made by the woman, called Brittany, for her future husband, Austin Spitler. He had the honor that few men have, to receive a beautiful love proposal before hundreds of people who were in the airport that moment.

The two young people hadn’t seen each other for 2 years, Austin’s girlfriend deciding to make him a surprise of big proportions on the airport of Oklahoma. She organized him a dance whereupon attended both their relatives and friends, the representation ending with a beautiful proposal coming from Brittany.

Another special proposal, that was also made inside an airport took place on 31 August 2013 when Sergent Eric Parker came home after a 11 month period, a time he had spent apart from his girlfriend. Although the distance was unbearable, Eric had this way time to prepare a real scenario for what was to be the best time of their lives. He was also helped by his colleagues to create the setting, each of them holding a word to build the love phrase: ”Will””You” “Marry “Me” ?

The surprise had the desired result, the beautiful couple scheduling the wedding in the spring of the next year.

One of the most beautiful and recent wedding proposals that took place inside an Romanian airport was surprised in January, on Chisinau Airport.

The proposal was made by Ruslan, who asked his friend Larisa to marry him , the two having known each other for ten years, although started dating the previous year.

Larisa was just returning in Moldova from Italy and didn’t have a clue about the surprise that was being prepared by his friend.

Ruslan had decided to make the big step so that he bought his friend a huge flowers bouquet, made a heart on which he wrote: “I’m waiting for my friend” with whom he welcomed Larisa and prepared a bottle of champagne, which he opened the moment he received the long expected answer. 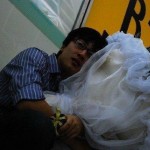 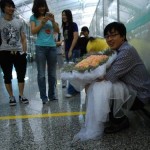