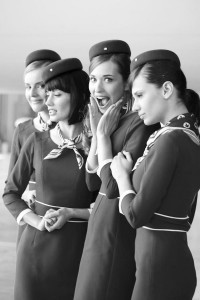 Although one knows that in order to preserve the crew’s uniqueness and the services offered, each company looks for certain patterns at the persons employed, the role of an air hostess  should be basically the same, regardless of the company for which you fly.

First of all, she must show passion for her job, have spirit of sacrifice and play the role of saver, when faced with extreme situations.

An air hostess  must show professionalism, team spirit and a good communication with the rest of the crew. She should always be kind to the passengers, who can approach her for various issues. She has to be patient, understand their sometimes exagerated fears, panic attacks or anxieties which can many times transform the passengers in some irrascible, uncooperative, maybe even repulsive persons before the others’ attempts to help. For this reason, it is particularly important to have experience in customer service, an experience that can help you overcome such situations during the flight.

Taking into account that the air hostess will be the ambassador of the company for which she works, the stewardess has to look impeccable, to be rested and clean.

Another mandatory requirement that must be respected is punctuality, a stewardess risking to lose her job if she comes late to a flight, thus proving superficiality and frivolity.

She must have strength of character and calm hot spirits that can disturb the quiet atmosphere during the flight ensuring the passengers that they will arrive safely at destination. .

The minimum age of employment as air hostess differs from a company to another, this generally being between 18 and 21 years and the maximum one being generally of 40 years. 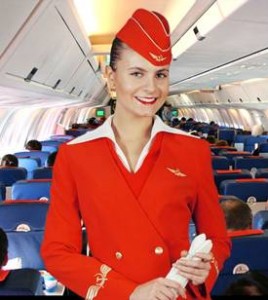 The persons who want to get this job must have an Artium Baccalaurens and bring proof of medical skills (JAR-FCL 3 medical certificate, class 2- neurological, ophthalmologic, gynecological, cardiological control, must pass the balance and resistance control in special conditions, that can be made with the revolving chair and pressure chamber).

The exam itself consists of the writen and oral English language test, and a test in geography of Romania and Europe, the minimum admission mark being 7 at all tasks.

Besides the quite high costs that this job involves , namely the completion of a theoretic course worth about 2000 euros that comprises 231 hours (including the final examination)and is performed in about 8 weeks there, there must always be paid the hours made with the flight simulator, approximately 500 hours, the flight hours amounting to 1000 euro and in addition the licensing exam around 100 euros.

As regards the physical demands, the lower limit varies from a company to another but generally starts from 1.58 metres to 2.12 meters on tiptoe with the hand raised.

Thus, if in the case of Wizz Air company, the minimum height for women applying for such a job is 1,65 metres in the case of the Swiss it may fall to 1.58 metres.

Lufthansa’s representatives claim that their flight attendants must have a height between 1,58 metres and 1,75 metres, and the KLM Dutch want their maximum height to be of 1,85 metres requiring that before the interview women should not be allowed to wear high heels to achieve this standard.

The first 6 months of employment are probationary for the air hostess.

Among the conditions required to get this job, the future stewardess must be able to swim 50 metres fully clothed and don’t have any panic attacks,

not even in extreme cases.

In addition, it is also worth mentioning that most of the airlines from Romania and also abroad are quite strict with the future personnel, forbidding them to have any tattoos or piercings or not expose them during the work hours.

Although, generally, the airlines are quite strict with the personnel they choose, there are also some airlines that recruit persons without a license only on the basis of fulfilling certain conditions, ensuring their students the theoretical and practical training for free.

Besides the good parts that this job implies, namely, the fact that it isn’t a monotonous job and you can visit inaccesible places, this job also supposes some disadvantages and sacrifices that you have to bear, in case you choose this path.

Such a job supposes that the hired person spends most of his/her time far away from home and the loved ones, this thing implying a quite big nervous consumption and basically giving up your personal life.

In addition, the pysical and mental health is threatened by the applicant’s work hours and the frequent changes of time zone.

This job also requires a good grasp of emotions and inner feelings. No matter if one confronts an unpleasant or traumatic situation that can effect the close ones the stewardess must prove a powerful self control, patience and interest in all the issues raised by passengers leaving worries and personal problems on the last place.

Among the pieces of advice given by the air hostess for the ones who want to follow this profession we mention:

“To the ones who really want to spend their times among the clouds , I advise them to have patience and persevernce. It would be advisable for them to see beyond the cool image of the flight attendants and realize that it is a stressful, risky and tiring job. It is a job that forces you to stay away from the loved ones for a long time and requires you to sacrifice your holidays. And eventually I would also suggest them to carefully analyze their lifestyle. In order to resist and succeed in this carreer it is good to be a little narcissist sociable, well informed , communicative and empathic”(Otila Zamfir –Oman Air)